IQ Scores and the Bell Curve

An intelligence quotient, or IQ score, is a number used to describe a person’s cognitive abilities, or how smart the person may be. If we were to give an IQ test to a large group of people, we would expect to see that 50% of those test takers would earn a Standard Score of 100. We call an IQ score of 100 the mean, or average score.

When we discuss test scores, it’s useful to group the numbers in a way that allows us to talk about them, in terms of how frequently we may see such differences in the general population of people. These groupings are called standard deviations (SD). Most IQ and achievement tests use a SD of 15 points.

If we plotted out all the test scores from that sample group onto a graph, the scores would form what we call a bell curve. This graphing model shows us how the vast majority of people score within one standard deviation of the mean. In other words, a little more than two-thirds of the people taking the same test will score between an 85 and 115.

Bell Curve: How IQ Scores Are Distributed Across Groups of People 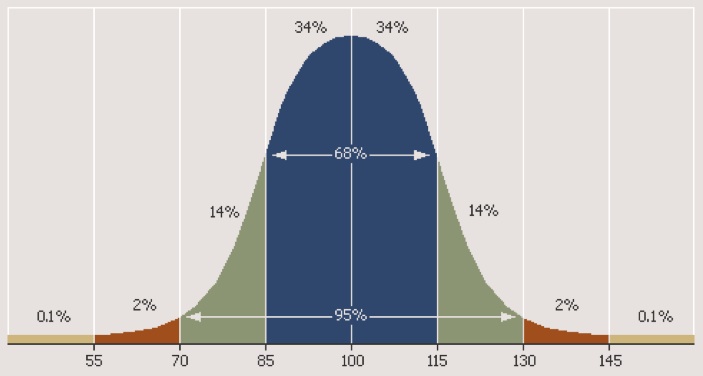 Children with IQ scores that fall below 70, -3 SD below the mean, are generally only seen in 2% or less than the general population of school children. These scores are further broken down into sub-classifications of mildly, moderately, and profoundly retarded. Education goals for child at this end of the spectrum are generally modified and aligned with basic communication and life skill needs.

At the other end of the bell curve, Standard Scores +2 SD from the mean, scores of 115 to 130, are seen in a large group of bright children who often do well in school. Oftentimes, admissions into school-based gifted programs require an IQ score of 130.

IQ scores falling between 130 and 145, or +3 SD from the mean, tend to be seen in about 2% of all school-age children. These highly gifted children often excel at academics with little effort. Children with IQs that fall beyond the third standard deviation, tend to be once in a lifetime students presenting unique educational challenges to general education classroom teachers, as their pace and depth of learning often exceeds those of their age-mates.

While we often talk about a single number to describe a person’s IQ, it’s important to remember that a margin of error always exists whenever a test is given to a person. For example, a loud noise may come from outside the room, startling an already-nervous IQ test taker. That jolt of adrenaline may possibly cause the person to miss a couple of questions, as they try to calm themselves and refocus on the test. Or, it’s possible that a young child finds themselves suddenly needing to go the bathroom in the middle of a subtest. They may hurry to finish that section so they can excuse themselves for a short break. For these reasons, and countless others, it’s important to consider a student’s band of scores, rather than a precise number.