Comparing WISC-V Changes to the WISC-IV

In late 2014, the newest edition of the Wechsler Intelligence Scale for Children – the WISC-V – was released. The new text introduced some significant changes to the way intelligence is now measured. While the Full Scale IQ score still exists, the WISC-V changed how it calculates the score.

The chart below shows you a side-by-side comparison of the WISC-IV and WISC-V test format.

Under the WISC-IV, children were tested with 10 core subtests. Subtest scores were grouped into 4 separate Index Scores, which then computed the FSIQ.

The WISC-V shuffles up the intelligence subtests, getting rid of Word Reasoning and Picture Completion. New subtests, such as Visual Puzzles, Figure Weights, and Picture Span, have been added. The WISC-V continues to use 10 subtests in its basic administration – but not all those subtests are used to calculate a child’s FSIQ.

The biggest change to the WISC-V comes with the reporting of 5 Index Scores, as well as Ancillary and Complementary Index Scores. The Verbal Comprehension, Working Memory, and Processing Speed Indices remain in the WISC-V. The Perceptual Reasoning Index from the WISC-IV has now been split into a Visual Spatial Index and a Fluid Reasoning Index. 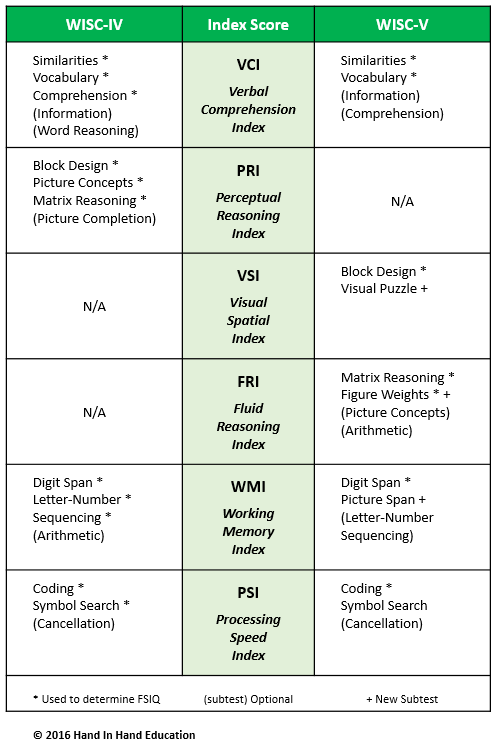